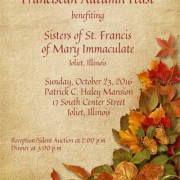 d for these Least of My Brothers (and Sisters) you do unto me.

This is what “Living the Gospel” means to me.  It’s not big and important things we do for  powerful and well known people. It’s the little things we do for those who are in need, have little support and who least expect good things. I learned long ago that many people do not have positive self-esteem. A kind word, a smile and a thoughtful act are just as important as more complicated and expensive solutions. As an individual, I try to be positive and uplifting to all persons that I meet. You never know when you can bring a little sunshine to someone having a difficult day.

I also believe that when we work together we make strong and positive actions and results. I have joined groups such as Pax Christi, Social Justice Organizations,  The Sisters of St. Francis ARC (Anti-Racism Committee), and other organizations.

St. Francis reached out to all the people he encountered.  You and I can also make a difference for all those we meet.

Peace and All Good!