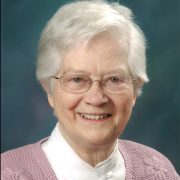 In the midst of a dark and quiet winter’s night, our beloved Sister Verene Alvina Girmscheid, followed the heavenly star that would lead her home to God. Born on January 6, 1935, she became the very best gift that her parents Theresa (Marx) and Robert Girmscheid could offer to the Christ Child. In the company of kings and camels, a true Franciscan witness to the joyful mystery of the Incarnation, Verene’s earthly life began on the feast of the Epiphany, and eighty-eight years later, came to completion within its octave on January 11, 2023.

The second oldest of seven children, Verene was a loving daughter and a devoted sibling to her three brothers and three sisters. With the family’s move from rural Wisconsin to the southside of Chicago, Verene had the opportunity to receive a Catholic education where the awakening of a religious vocation occurred at an early age. During the Summer of 1948, as a kind, serious, pious, hard-working and intelligent thirteen-year old, character traits that would follow her through life, Verene successfully persuaded her parents that entering the aspirancy of the Joliet Franciscans was a very good idea. She was convinced of the call from which she never wavered over the course of the next seventy-five years.

If you would like to make a donation in honor of Sister Carlene or another Joliet Franciscan Sister, please click here:  Remembering our Deceased Sisters.