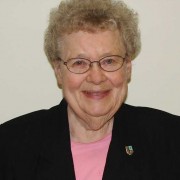 It is with deep sadness that we announce the death of Sister Karla Zdenek, OSF.  Sr. Karla died on Sunday, May 8, 2016.  Our condolences to her classmates and to her family and friends.

Sister Karla’s services took place at Our Lady of Angels Chapel on Thursday, May 12, 2016, from 2:00 – 6:45 pm, followed by her funeral Mass at 7:00 pm. Burial was on Friday Morning, May 13, in the Congregation Plot at Resurrection Cemetery in Romeoville, Illinois.  May Sr. Karla rest in peace. 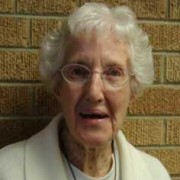 It is with deep sadness that we announce the death of Sister Eileen Bannon.  She died on Tuesday evening, October 6, 2015.  Our condolences to all of our Sisters and to Sister Eileen’s family and friends.

Sister Eileen’s wake and funeral service took place at Our Lady of Angels Chapel on October 13, 2015.  She was buried on October 14, 2015 at Resurrection Cemetery, in the Congregation Plot, in Romeoville, Illinois.

Sr. Eileen’s prayer service and funeral can be viewed on our live-stream channel by clicking on the Congregational Shield on the front page of our website. Then click on her photo. 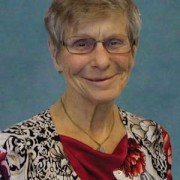 It is with deep sadness that we announce the death of our Sister Dorothy Kinsella who died on September 14, 2015, around 3:23 p.m.

Sister Dorothy’s wake and funeral service took place at Our Lady of Angels Chapel on September 21, 2015.  She was buried on September 22, 2015 at Resurrection Cemetery, in the Congregation Plot, in Romeoville, Illinois.

Sr. Dorothy’s prayer service and funeral can be viewed on our live-stream channel by clicking on the Congregational Shield on the front page of our website. 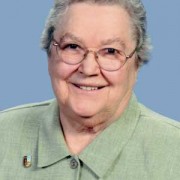 After a lifetime of beginning her day in the wee hours of the morning, long before those for whom she cared were up and moving, it came as no surprise that our Sister, Julie Ann, should respond to God’s eternal call at 3:30 a.m. And so it was that on August 12, 2015, the anniversary date of her three religious commitments and the former feast of St. Clare, she peacefully embodied her final “here I am,” and passed quietly and securely into eternal life, tenderly comforted by her faithful companions and surrounded by a circle of love.

A Nebraska native, Julie Ann was born to Bertha (Biermann) and Phillip Borer on March 1, 1926. One of twelve children, she grew up amidst the many joys and challenges of family life in rural America. She loved the land and the wonders of creation. From an early age, she learned that the fruits of every harvest are the result of equal measures of hard work, humor, patience, sacrifice, prayer and blessing.

On Sunday morning, June 21, 2015, our sister, Marilyn, was enfolded by the radiant beauty of sunlight filtering through the window of her bedroom window. The stormy night of teeming rain, rolling thunder and crackling lightening had given way to an atmosphere of peace and calm. Her breathing slowed as did the beating of her generous and kind heart. As she made her transition from this life to eternal life, her long-awaited and beloved angels seemed to have made their presence known. Safely and securely, they led her into paradise to abide in the Heart of God.

Born to her parents, Pearl Zimmerman and Charles Franze, on July 17, 1932, Marilyn was a “Joliet girl” from the very beginning of her eighty-two years of life. Taking delight in being the younger sister of her older brother, Charles, she knew she had a lifelong friend whom she could count on. Yet, important as family was for her throughout her childhood, as an eighth grader at St. John Parish School, Marilyn began to think about her future. Inspired by the Joliet Franciscan Sisters who were her teachers, and encouraged in her Franciscan aspirations by Fr. Conan Mitchell, O.F.M. (1915-2009), Marilyn enrolled at St. Francis Academy, where she studied for three years before entering the Congregation as a postulant on September 4, 1950. She was received into the novitiate on August 12, 1951, and given her religious name, Sister M. Jacinta. Two years later, with a joyful heart, she made her first profession of vows and in 1956 she made her final profession as a Sister of St. Francis of Mary Immaculate.