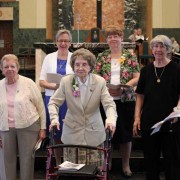 To read more about the 2016 jubilee celebration, click here: Jubilee-2016 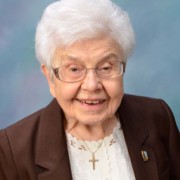 Sister Mary Franz recently celebrated a milestone birthday.  Born in Ohio on May 23, 1916, Sister Mary (formerly known as Sister Ursuline) celebrated her centennial  birthday among family, friends and residents at Our Lady of Angels Retirement Home in Joliet. 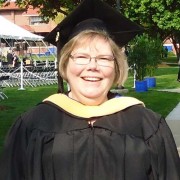 Sister Deborah Gaughan, OSF, recently graduated from Aurora University with a Masters of Social Work degree with a specialization in child welfare. Prior to graduation, she passed her state exams and has obtained her LSW and CWEL licenses. Sister Deborah hopes to be able to work with abused children and their families. She believes that through involvement and education, we can all do something to help others in need.  Congratulations Sister Deborah on a job well done! 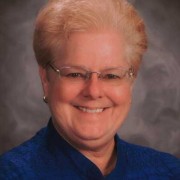 On a beautiful Sunday afternoon, over 200 women joined the Sisters of St. Francis of Mary Immaculate at the Annual Afternoon Tea held at the Jacob Henry Mansion in Joliet.  Many of the women who attended the Tea on April 24, some for the first time, came in colorful hats. Twenty-four basket raffle items were on display including several favorites; the Sinatra Centennial Basket, the Star Wars Galactic Fun Basket, and the crowd favorite, Panera Bread Certificate. There was a music interlude by Karen Isberg, where she sang several old favorites. Sister Dolores Zemont, President of the Congregation, greeted guests and thanked them for their attendance at the Tea and for their support.

Guests were asked to bring a donation of boxed food items for a local food pantry.  Over 300 boxes of cereal, cake and soup mixes were delivered the next morning to St. John’s Food Pantry in Joliet.

The Afternoon Tea is an annual event held to raise funds and awareness of the Congregation.  Plans for next year’s tea are already in process.  If you would like more information on the Afternoon Tea or would like to place your name on the invitation list, please contact the Mission Advancement Office at (815) 725-8735.

Click here to view photos of the 2016 Afternoon Tea

Sisters Margaret Hoffman and Lucille Krippel were recently honored for the dedicated service at their varied ministries. Both of these sisters are members of the Congregation of the Sisters of St. Francis of Mary Immaculate, more commonly known as the Joliet Franciscan Sisters.

Sister Margaret Hoffman, OSF was recently honored by the Diocese of Columbus (Ohio) Department of Education for her dedication to Catholic Education.

A native of Columbus, Sister Margaret has been a high school English teacher for more than 50 years. When she first entered the Congregation, her first teaching assignment was at St. Francis Academy (now Joliet Catholic Academy- JCA) in Joliet followed by St. Thomas Aquinas High School in Louisville, Ohio.

Sr. Margaret was then assigned to the Diocese of Columbus where she continued to teach high school English. She has been at her present ministry, St. Charles Preparatory High School in Columbus, Ohio, for the past 25 years, and counting!

In addition to her teaching duties, Sister Margaret also prepares the school’s liturgies and serves as the local chapter coordinator for several of the Joliet Franciscan Sisters who live in Ohio and Michigan.

Sister Lucille Krippel, OSF received the Sister Myra James Bradley Award by the Penrose-St. Francis Health Foundation. This annual award is given to an individual who has selflessly helped fulfill the mission of the Foundation.

Sister Lou, as she is called, served in schools for many years before being named the Administrator of Guardian Angel Home in Joliet, IL, 1971. She served at Guardian Angel until 1976. In 1980, Sister Lou moved to Colorado where she served in parish ministry for the Diocese of Colorado Springs. She then became the director of what is now Catholic Charities in that diocese. After returning to Joliet for a few years to serve as CEO of Joliet Catholic Academy (JCA), Sister Lou returned to Colorado and joined Penrose-St. Francis Health Services as the Director of Mission Effectiveness and Spiritual Care.

In 2007, she joined the planning committee for the John Zay Guest House and became the house manager a year later, a position she still holds today. Sister Lou has made the guest house a “home away from home,” a place of comfort, of healing and of love.

On Sunday, October 25, 2015, the 26th Annual Franciscan Autumn Feast was held at the Patrick C. Haley Mansion in Joliet, IL.  We had beautiful weather, wonderful attendance and a delicious dinner.  It was also a time to congratulate and honor our four honorees: Claire Millweard and Fran Naal with the Joliet Franciscan Heritage Award and Diane Nilan of Hear Us and the Will-Grundy Medical Clinic with the Mother Alfred Moes Award.

We would like to especially thank our committee members, guests, sponsors and advertisers, as well as those who donated baskets and raffle items for the auction.  We are truly grateful for your support.

Following is a listing of our Corporate Sponsors and Individual Sponsors for the event.

The Annual Franciscan Autumn Feast not only supports the Sisters, but it provides the Sisters with the opportunity to honor individuals and organizations who are impacting the community. In 2015, the Sisters are happy to announce that there will be two Mother Alfred Moes Award Honorees and two Joliet Franciscan Heritage Award Honorees.

dical Clinic, now in its 31st year, will be honored for its commitment to provide free medical and dental care to adults who have no health insurance or medical care entitlements and meet prescribed income guidelines. Care is provided by physicians, dentists and other professionals who volunteer their time and expertise to the Clinic.

Diane Nilan is the founder and president of Hear Us, an organization that provides voice and visibility to the country’s homeless children and youth. Diane travels around the country in her home – an RV – and through films and books, works to bring this message of children in crisis to educators and social service workers.

Fran Naal has been involved with the Sisters for many years. Not only is she a graduate of the College of St. Francis (now the University of St. Francis), she is the niece of the late Sister Loretta Tures. So one can say, Fran grew up with the Sisters in her life. Fran has been a member of the Feast committee almost from the beginning of the event and is a founding member of the Sisters’ 520 Club. She is an active member of the Visitation & Aid Society, the Joliet Area Community Hospice Guild, the University of St. Francis Alumni Association, as well as others.  Fran cares about Joliet and the people who call it home. Fran is a Joliet Franciscan Heritage Award Honoree.

Claire Millweard has also been involved with the Sisters for most of her life. As a student at St. John the Baptist Grade School and St. Francis Academy, Claire has had a long relationship with the Sisters. Like Fran, Claire has also been a member of the Feast committee almost from the beginning and is also a founding member of the 520 Club. Claire is a member of the Joliet Area Community Hospice Guild, the Visitation & Aid Society and others. Claire has lived in Joliet her entire life and her actions speak to her commitment to this community. Claire is a Joliet Franciscan Heritage Award Honoree.