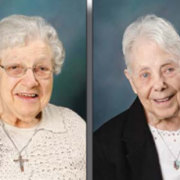 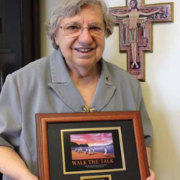 Sister Leomarie Luecke was recently honored by the Spanish Community Center of Joliet, Illinois, for her 40 plus years of service to the center
and the community at large. She has been involved with the Spanish Center since 1971. To this day, many people still come to their door looking for “the nun who speaks Spanish that teaches English!”

At their Award Celebration and Fiesta held on March 13, 2014, The Spanish Community Center bestowed their Community Service Award to Sister Leomarie. While presenting Sister Leomarie her award, Elizabeth Guzman, a Board Member of the Spanish Center, said this, “Do you know how it’s often said that if you want to change the world, teach? Well since 1971, Sister Leomarie has been a catalyst for positive change in the lives of hundreds – maybe thousands of people who, thanks to Sister Leo, have learned to speak the English language!” It is indeed a great tribute to Sister Leomarie, who through her special dedication, patience and love of teaching, has been able “to empowered so many who have contributed to a better community for everyone.” Her award reads: “Walk the Talk – take the initiative and lead the way, you can make the difference. Sister Leo Marie Luecke, In sincere appreciation of your contributions. 2014 Spanish Community Center.

Sister Leomarie and the other honorees received a letter from Illinois State Senator, Pat McGuire in which he says the following about Sister Leomarie, “…your skills, smile, musical talents continue to enrich our community. Felicidades and continued good wishes to each of you and to the Spanish Community Center.”

There is no stopping Sister Leomarie anytime soon. Sister Leomarie who just celebrated her 76th birthday and has said there are no plans for retiring. As she put it, “As long as I can continue, I will!”

On Sunday, September 14, 2014, the feast of the Exultation of the Cross, as the words of John’s Gospel echoed in churches throughout the world, our sister, Anne Flaska, passed peacefully into eternal life at the age of 94. Drawn by the God who “so loved the world that he gave his only Son,” Anne clung faithfully to the conviction that “everyone who believes in God will not perish but will have eternal life (Jn 3:16).”

Born on December 6, 1922, the feast of St. Nicholas, Anne was lovingly welcomed into the world by her parents Mary (Turkan) and John Flaska. Raised on the near north side of Chicago, Anne was one of six children and a most energetic member of her hard-working and faith-filled family. Ever mindful of her immigrant roots, Anne embraced her Slovak cultural heritage with great enthusiasm, pride and joy. Educated at Sacred Heart School (Oakley & Huron Streets), she took advantage of every opportunity made available to her. It was at Sacred Heart that Anne’s lifelong passion for teaching was inspired, nurtured and encouraged.

Sister Mary Olivieri began life on April 17, 1928, in Mansfield, Ohio, the first born of four children: Nick and Lucy, now deceased, and Rose, now Sister Rose, RSM, who resides in Fremont, Ohio, at St. Bernadine Retirement Home. Sister Mary’s parents, Joseph and Dominica, were both born in Italy and spoke only Italian in the family home. Mary’s early family life was enriched by Italian customs and culture as well as a deep faith shared by her parents. Mary and Rose fondly recalled their yearly trips to Carey, Ohio, for the Feast of the Assumption of Mary where they spent two days at the Shrine of Our Lady of Consolation. Maybe this parental devotion was the motive in naming their first born Mary.

Mary’s love for cooking was passed on by her mother who also taught her daughter the art of gardening. Her cooking skills have been appreciated by many of the Sisters with whom she lived. The faith life fostered in her family and her years at St. Peter’s School in Mansfield may have been the seeds of her call to become a Sister of St. Francis of Mary Immaculate. Arriving in Joliet in 1947 as a postulant, Mary’s dream was short-lived. Her mother’s illness made it necessary for her to return home to help with her younger siblings. After her mother’s death in August, 1948, she began working and even bought herself a car. Those who knew her well also knew about her love for driving! They would also know about her determination and decisiveness to do what she knew had to be done!

On the morning of June 2, 2014, our Sister Andrea Prindes passed quietly into eternity in the same manner as she passed through every day of her religious life. In her living and in her dying, she remained a woman of deep prayer. Steadfast and unrelenting in her attachment to the Sacred Heart, she clung hopefully to promises that anchored her faith.

Born on June 6, 1922, Andrea was welcomed into the world by her loving parents Hermina (Kovacik) and Andrew Prindes. Coming of age in the Depression years, Andrea, in the company of her three older brothers and her younger sister Emily, came to understand the importance of self-sacrifice and hard work. Raised in a loving atmosphere of joy and gratitude to God, Andrea’s religious devotion and ethnic pride in her Slovak cultural heritage, informed and influenced her sense of vocation and her call to Franciscan sisterhood.

On May 14, the Feast of St. Matthias, an Apostle chosen by God through other Apostles, Sister Marianne Cardosi was chosen to return to the Source of her being. Marianne’s life began in Kankakee, Illinois, on March 21, 1930, the oldest of five children born to Judge Victor and Pauline (Mussa) Cardosi. She is preceded in death by her parents and her sister Joan Cardosi and survived by her two sisters, Paula and Jacquelyn and her brother Robert.

Her family attended St. Rose Parish in Kankakee. Marianne received her early education at St. Joseph Seminary Grade School and St. Joseph Seminary High School. Attending the College of St. Francis (University of St. Francis) in Joliet, Marianne, influenced by her father’s love of history, received her Bachelor of Arts degree in History and Education in 1951. Further studies took her to DePaul University in Chicago for a Master of Arts degree in History and to Olivet Nazarene University in Kankakee for a Master of Arts degree in English Education. Sister Marianne won a grant in 1969 for a summer program in American Studies at Northern Ohio University. She also attended the Franciscan Institute in Theology and Scripture at the College of St. Francis and Adult Education Courses at the University of Illinois.

“I’ll Take You Home Again, Kathleen!”
Sister Kathleen Kirk was an Irish Lassie and a musician throughand through, and how fitting that the sheet music of this song was in her file. Did she have a premonition that the Lord wouldbe singing this melody to her in the wee hours of April 14, 2014?

Sister Kathleen was born the second daughter of five children to William and Marguerite (Clancy) Kirk on September 29, 1916. Kathleen was baptized one month later on October 29 at her Parish Church, St. Pascal’s in Chicago, Illinois, and attended St. Pascal Grade School and Alvernia High School in Chicago. Her connections to St. Pascal Parish remained strong over the years. She became part of the parish staff in 1955 when she was assigned there to teach music and play the organ.

On Tuesday, November 26, 2013, early in the afternoon, our sister, June Marshall, made the final stitch on the embroidery of her life, an intricate piece of needlework which took 79 years to complete. Trusting in God’s will and steadfast in her desire to make of her life a reflection of God’s handiwork, she endeavored to follow a unique and sometimes complicated pattern of divine design. Mindful of the underside of all needlework, especially the embroidery of life, June was no stranger to the shadows that accentuate the knots and twists, and the seemingly mismatched threads of being human. Yet, she also was familiar with those experiences of grace and inner peace that come when the light of Christ shines bright as the morning sun, revealing the preciousness and significance of each embroidery of life, topside up.

Born in Toledo, Ohio, on August 21, 1934, June Rose Marshall was the eldest of five children born to Eleanore (Schroeder) and Joseph Marshall. Attentive to her parents and to her siblings, Donald, Gary, Michael and Barbara, June was a devoted daughter and older sister. She began her elementary education at Sacred Heart School in Toledo. In second grade, she transferred to Immaculate Conception School in Darby and after graduation from eighth grade, she attended Central Catholic High School for two years. Inspired by the Sisters whom she knew as teachers, June experienced a call to religious life, and in September of 1949 she became an aspirant with the Sisters of St. Francis of Mary Immaculate and completed her secondary school education at St. Francis Academy in Joliet, Illinois.