Imagine leaving behind your family and your home to answer a calling.  Armed with a knowledge of math and music, art and architecture, and the ability to speak English, French, German and their native Luxembourg language, Maria Catherine Moes, who would go on to become Mother Alfred Moes, and her sister Catherine, the eventual Sister Barbara, took a leap of faith in 1853 and traveled to the United States to begin a new life of service to God and

Going first to Wisconsin and spending time in Milwaukee before leaving for Indiana where they lived with two other Congregations, the Moes sisters were accepted, along with Sister Bernard Peacard and Sister Alberta Stockhoff, into the Franciscan Third Order Regular in 1863.  Within months, this small group of Sisters had begun teaching at St. John the Baptist School in Joliet.  In 1865, Mother Alfred traveled to Allegany, New York to meet with Father Pamfilo da Magliano, where on August 2nd he named her as the first General Superior of this new congregation, the Sisters of St. Francis of Mary Immaculate.

And the rest, as they say, is history.

To learn more about Mother Alfred Moes and her legacy, click here. 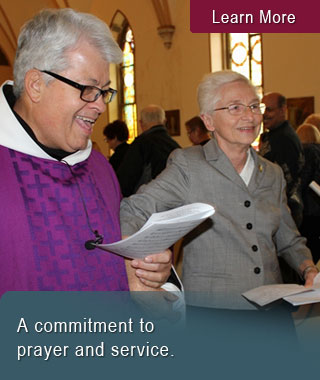