On Saturday, February 9, 2013, our sister, Marian Voelker peacefully made her journey home to God. Sharing with her beloved Mother Alfred a lifelong devotion to Our Lady of Lourdes, after whom she was named and whose feast day was close at hand, Marian rested confidently in the knowledge that at the hour of her death she would not be alone. Graciously living out her faith-filled “Fiat,” she quietly reached the end of her days and entrusted to the God of History the final chapter in the story of her life.

Born on October 18, 1935, Marian Bernadette Voelker was the sixth of ten children to be lovingly welcomed into the world by Robert and Marian (Schilling) Voelker. As a young child, Marian and her family lived in close proximity to her Voelker grand-parents from whom she acquired an inter-generational appreciation for “living histories.” Growing up in East St. Louis, Illinois, Marian’s inquisitive mind and historical imagination were stirred at an early age as she began to make meaning of the joys and sorrows of life as seen from the banks of the Mississippi River, the railway crossroads of the Midwest and a city that was an urban crucible of rapid social and economic change. Nurtured in the faith at St. Elizabeth’s Parish and educated by the Adorers of the Blood of Christ at St. Teresa’s Academy, she was drawn to religious life, yet uncertain as to where her envisioned vocational path would lead. 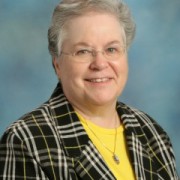