On Friday afternoon, May 4, 2012, as the Church concluded a week of prayer and reflection dedicated to the Good Shepherd, our Sr. Martin Hornak responded without hesitation to the tender voice she had longed to hear. Lovingly called by name, the Good Shepherd, to whom she had entrusted her life of consecration and mission, enfolded her in His arms, close to His heart, and gently carried her home for all eternity.

Born to her parents Johanna (Zalubi) and Martin Hornak on May 17, 1917, Julia entered a world where England and Germany were waging war, a world where miraculous events were taking place at Fatima, and where the Chicago Cubs triumphed over the Boston Braves four days in a row. Baptized at Sacred Heart Parish on Chicagoʹs west side, Julia was initiated into the faith and ethnic heritage of her Slovak ancestors and deeply influenced by the customs and character of a vibrant immigrant community. One of five children, she learned from an early age onward the importance of family and friendship, the centrality of religious commitment and cultural identity, and the necessity of education and the arts. Throughout her life, she would promote these values as she empowered others to cultivate them from one generation to the next, from one culture to another. 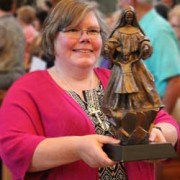