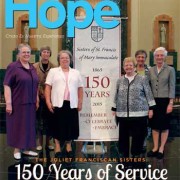 Over their 150 years, the sisters opened classroom doors, and thousands of students walked through to meet teachers who would help them learn about God, the world and themselves. They founded the Franciscan Learning Center, St. Francis Academy (now Joliet Catholic Academy) and the College of St. Francis (now known as the University of St. Francis), all in Joliet. The sisters taught in schools across the Diocese of Joliet, the Archdiocese of Chicago,towns in Illinois and the United States. As the immigrant population of the U.S. grew, sisters who spoke German, Slovak and Polish were sought by pastors needing teachers who could teach the children of their growing parishes.
Click here to read the Christ is our Hope article – Sept. 2015
https://www.jolietfranciscans.org/wp-content/uploads/2015/09/Christourhope-sept2015.jpg 449 350 Karen Garifo http://www.jolietfranciscans.org/wp-content/uploads/2021/10/OSF_Logo-new2021_web.png Karen Garifo2015-09-10 16:11:072015-09-10 16:13:56Sisters featured in Christ is our Hope Magazine